The Habitat III Summit of the United Nations will take place in Quito in october 2016, as the result of a long series of international negotiations during which the Committee was highly involved over the years 2014-2015: Financing for Development, the Sustainable Development Goals (SDGs), or the climate negotiations.

The negotiations have reached a global consensus on the objectives to be met (in particular through SDG 11), and on the growing economic, social and environmental challenges of financing urban development worldwide, and in particular in developing countries.

However, the issue that is still pending relates to the effective implementation of the public policies and infrastructures necessary to reach these objectives, and meet these challenges. Indeed, the debate on the SDGs cannot come to a term because of the lack of precise indicators for monitoring these objectives, and guarantee a localized and integrated approach. Still, the urgency of the needs and the costs of inaction call for a quick joint-mobilized of all stakeholders.

As regards local finance, the imbalance between the responsibilities devolved upon local authorities and their resources have severe consequences on the well-being of inhabitants of urban areas. The issues revolving around the means of implementation, and sustainable financing of urbanization, will be at the core of the Summit in Quito.

As a result the CLFD, through its various activities, is trying to bring out key fundamental principles on local finance, and to draw concrete and universal recommendations for Habitat III, to be adjusted and prioritized according to local, national and regional frameworks.

Habitat III is a unique opportunity for local governments to make their voices heard.

Accordingly the UCLG staff and Working Committees, through the Global Taskforce of Local and Regional Governments, in addition to be leading a policy unit on governance, have representatives in a few others experts groupes: culture, social inclusion, and local finance - with Nathalie Le Denmat, Secretary Executive of the Committee).

They also participate actively in the drafting of the issues papers (see the one on local finance) that will influence the final declaration. The last meeting of the GTF members (February 2016, Barcelona) enabled the members to draw a joint roadmap for Habitat III.

UCLG has also brought out the advocacy in favor of decentralizations to preparatory thematic meetings, including the one on financing urban development (9-11 March, Mexico), where the CLFD was highly involved and has worked in collaboration with the Committee of social inclusion on the thematic: "local finance and social and spatial justice" .

In parallel, the Local and regional government networks of the Global Taskforce have agreed on the key principles that should underpin the Habitat III process, as well as a set of seven initial policy recommendations that should act as the “cornerstones” of the New Urban Agenda. 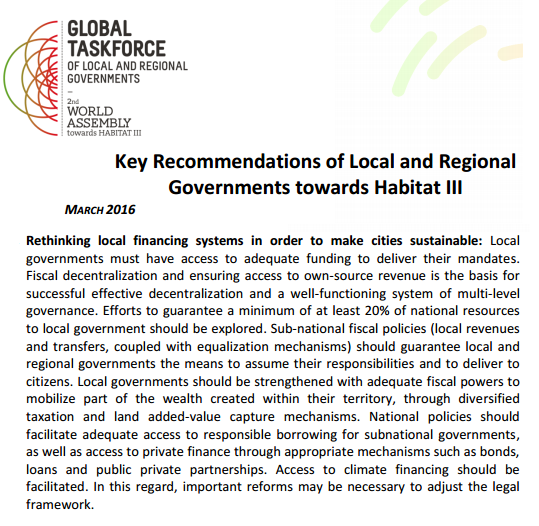