CISDP Recommendations on Financing the Right to the City for all

Program of the conference 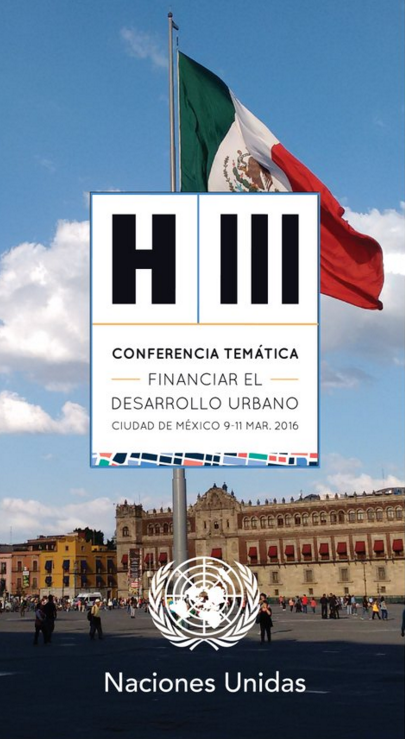 The thematic meeting on urban financing and municipal finance in preparation for the Habitat III Summit "Financing urban development: the Millenium challenge", was held from March 9th to 11th, 2016, in Mexico, with the aim to draw the priorities for the financing of the new urban agenda. The final declaration is avalaible here.

In the framework of its advocacy during the whole preparatory process, UCLG Committee on Local Finance for Developemnt will actively participate in this event, in order to include in the final declaration, strong key messages to bring to Quito. They will relate to the necessity to strengthen and diversify local finance and to facilite local governments' access, at the national and international levels, to the necessary long-term resources for ensuring a sustainable urban development and reach the SDGs.

The Committee participated in particular in the elaboration of the plenary session 2. This session was dedicated to debating on sources and innovative financing mechanisms for urban development. Moderated by UCLG General Secretary Pep Roig, speakers in the session included:

Nathalie Le Denmat, Secretary Executive of the Committee, also participated in a parallel session 1B on local priorities in the global agenda of urban financing​.

Through a collaboration with the Committee on Social Inclusion, Participatory Democracy and Human Rights of UCLG, the CLFD also took part in a side-event co-organized by the CISDP and the Government of the City of Mexico, on local governments' social investments: justice and urban equity, in order to launch a debate on the balance between the use of land and real-estate valuation to finance local investments, and the fight against economic and spatial inequalities.  At the end of the side-event, the CISDP declaration on local finance and right to the city has been adopted.

Finally, a side-event was organized by the Cities Climate Finance Leadership Alliance on the 9th, on the thematic: "A Green Deal for Cities and Regions’ Climate Finance : Partnering for change in view of Habitat III".

Webcasts from most sessions are available at this link 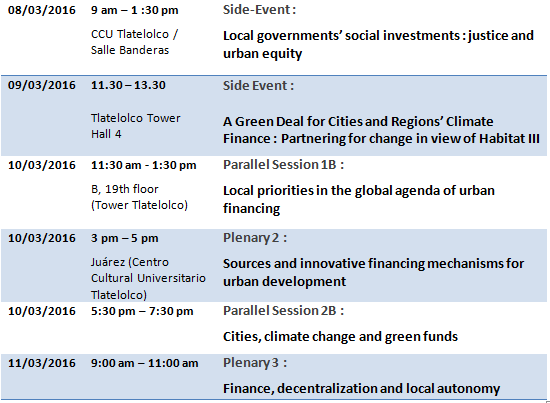 You can find the online urban dialogue on the topic here