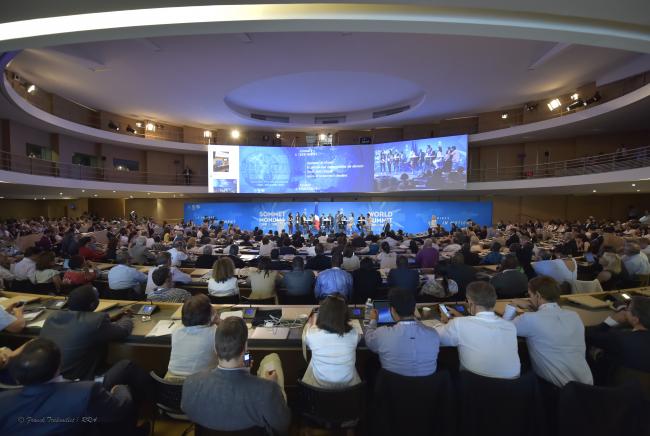 UCLG Committee on Local Finance participated in the World Summit Climate and Territories, organized on 1 & 2 July in Lyon-France, by the Rhône-Alpes Region. The Summit gathered around 900 local and regional representatives and climate stakeholders with the objective of finding synergies and unity towards the COP21 in Paris in December.

UCLG and its Committee on Local Finance for Development were closely involved in the organization of this summit and the formulation of such recommendations. In particular, they mobilized through the organization and animation of the workshop on climate finance, together with the GERES, based on the general agreement that the gap between the needs and the amount actually dedicated to resilient infrastructures is widening, in particular in developing countries.

The workshop gave the audience a broad overview of ongoing initiatives by stakeholders from all over the world committed on this topic: the Federation of Canadian municipalities, Dakar, Ho Chi Minh and Mexico City, as well as organizations such as the French Development Agency (AFD) and the OECD Directorate for Public Governance and Territorial Development, that came to underline capacity-building, scale and cooperation, between territories themselves and between the central and subnational levels of governments. CDC Climate, FMDV & UNCDF broadened the debate towards avenues for improvement and opening the path for coalition of stakeholders, by building upon existing initiatives (e.g. Summit of African Cities and Regions for Climate in Yamoussoukro in June 2015).

The main recommendations that have been drawn out of the workshop are:

Two new projects have been introduced:

At the end of the Summit, 50 organizations have signed the General Declaration “Placing territorial action at the heart of the response to climate challenge”, making it the most widely supported climate declaration.

Now it is crucial to make synergies between the climate negotiations and the rest of this year’s main negotiations if we want these proposals to be effective. In this sense, Ronan Dantec, Co-Coordinator of the Summit and UCLG's global spokesperson for climate issues, was in Addis Ababa last week with the Committee on Local Finance and the Global Taskforce of Local and Regional Governments for the Conference Financing for Development.